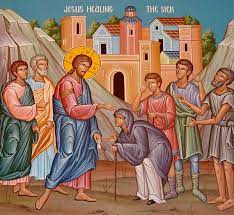 Now he was teaching in one of the synagogues on the sabbath. And just then there appeared a woman with a spirit that had crippled her for eighteen years. She was bent over and was quite unable to stand up straight. When Jesus saw her, he called her over and said, “Woman, you are set free from your ailment.” When he laid his hands on her, immediately she stood up straight and began praising God. But the leader of the synagogue, indignant because Jesus had cured on the sabbath, kept saying to the crowd, “There are six days on which work ought to be done; come on those days and be cured, and not on the sabbath day.” But the Lord answered him and said, “You hypocrites! Does not each of you on the sabbath untie his ox or his donkey from the manger, and lead it away to give it water? And ought not this woman, a daughter of Abraham whom Satan bound for eighteen long years, be set free from this bondage on the sabbath day?” When he said this, all his opponents were put to shame; and the entire crowd was rejoicing at all the wonderful things that he was doing.

The Lord Jesus stood in the synagogue on the Sabbath day to preach, and as he did, he saw a woman. Her ailment made it difficult for her to see him, with back bent and eyes fixed on the ground, unable except with exceptional pain to do much except look a little to the left or to the right. She knew only the dust in front of her feet. The word used to describe the woman as ‘bent over’ is also the word used in the bible for a person in a position of extreme humility. And so this woman not only knew great physical pain and incapacity, she was almost certainly someone of a very low social position. She was invisible, lonely, ignored. At best she was someone who was difficult for people to see, at worst, she was the kind of person people did their best to avoid. And into this picture of a lonely, ignored woman, these otherwise ordinary sounding words came: ‘Jesus saw her’. Suddenly a woman who is socially invisible is seen as a person, a beloved daughter of Abraham, a child of God. Acknowledged. Loved.

She didn’t seek Jesus out, perhaps too ashamed, or modest to bother him. She didn’t hassle him until he helped her. The Lord saw her, and called her, and brought her to the front of the synagogue for everyone there to acknowledge. And as she stood there, he healed her.

I think this story offers hope to those who feel small, bowed down, overlooked, invisible. Maybe at home, or work, maybe even in the church? Which of us doesn’t feel like this at times? Jesus Christ is the one who sees, who notices you even if no one else does. He sees you more clearly than we see yourself. In his eyes you are acknowledged and loved. You are a child of God.

At this point someone steps into the story who it is easy to regard as the villain: the synagogue ruler. It was the ruler’s job to ensure that the Law of the Old Testament was faithfully taught and honoured in the synagogue and in the wider community. Think of him as the local vicar. And he was deeply upset by what he had seen. The commandment to keep the Sabbath, the holy day, was one of the most cherished commandments of Jewish people. Keeping the Sabbath was what marked you out as one of God’s people. It was deeply important.

And before we are too harsh on the Synagogue ruler, labelling him perhaps as a jobsworth, we’ve all met them, more concerned with the rules than with the real human beings whose lives they affect. It’s easy to judge him harshly. But we should remember every community needs rules in order to preserve its common life. Yes, the rules permitted mercifully responding to someone’s urgent need, but even so, to his mind Jesus had clearly broken the Law. After all, the woman’s condition, while severe and life limiting could hardly be described as life threatening. She had been suffering with it for eighteen years. Surely, her healing could wait until the Sabbath was over? But Jesus is insistent: his healing of this woman in no way breaks the Sabbath laws.

We might need to think a little about the origins of the Sabbath day to understand how Jesus justifies his actions.

When we think of the Sabbath we tend to remember the story of the creation of the world, that God spent six days creating and rested on the seventh, hallowing it as a day of rest. This is, after all, the way the Sabbath is presented in the Ten Commandments:

Remember the Sabbath day by keeping it holy… For in six days the Lord made the heavens and the earth, the sea, and all that is in them, but he rested on the seventh day.

So we tend to think that, woven into the fabric of the universe, there is a pattern of work and rest, and God’s people are mandated to observe that pattern too, and so we naturally emphasise that the Sabbath is a time of rest, of ceasing work.

But we often forget that the Old Testament gives another reason for the Sabbath in the book of Deuteronomy:

Observe the Sabbath day by keeping it holy, as the Lord your God has commanded you… Remember that you were slaves in Egypt and that the Lord your God brought you out of there with a mighty hand and an outstretched arm.

God’s people, Israel, had been in Egypt for hundreds of years. As time went on, the Israelites were forced into slavery. They were forced into back breaking labour making bricks, day after day, with no future, with no hope of rest, with no time even to worship God. Every day, the Hebrew slaves were told that the only worth they had was found in how many bricks they produced. In desperate exhaustion, they cried to God, and God heard them and freed them and gave them the gift of rest. Being freed from slavery was such a pivotal moment for the Hebrew people, it could almost be described as a re-creation, as though God had re-made the heavens and the earth, and as such, it changed the way they thought about the Sabbath. From now on the message of the Sabbath wasn’t just about God’s rest from creating, and our need to take care of yourself and have a day off. It now proclaimed a message of liberty; a message from God which said, ‘no human being can ever claim to own you. You are no longer a slave. You don’t have to work for a master who only ever asks for more. You are God’s child. God has set you free.’

St Irenaeus wrote, ‘the glory of God is a human being fully alive.’ When Jesus sees us, and calls us, and places his hand on us, we start a journey of becoming fully alive, everything that a human being is called to be: a person of dignity. A person loved by God and named as one of his children.

The Lord Jesus sees us. He sees us as we really are, he sees our needs, he knows us entirely, and he recognises us a God’s children. May we all hear his call on our lives too, a call which transforms and releases us to live with dignity and freedom of God’s daughters and sons. And knowing that dignity and freedom, may we seek to make every day a Sabbath day, a proclamation of the glorious freedom of the Children of God.