This is my body 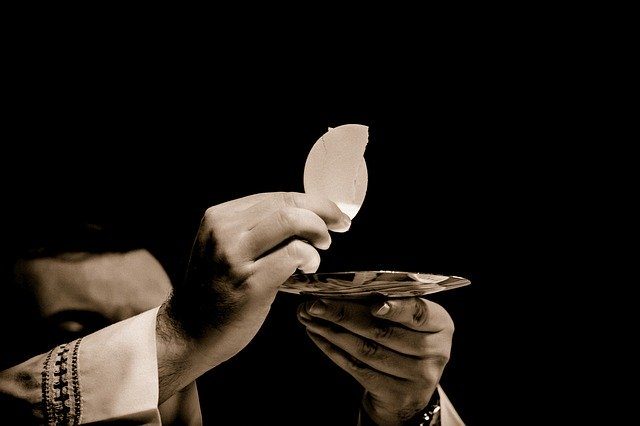 Now there was a woman who had been suffering from haemorrhages for twelve years; and though she had spent all she had on physicians, no one could cure her. She came up behind him and touched the fringe of his clothes, and immediately her haemorrhage stopped. Then Jesus asked, ‘Who touched me?’ When all denied it, Peter said, ‘Master, the crowds surround you and press in on you.’ But Jesus said, ‘Someone touched me; for I noticed that power had gone out from me.’ When the woman saw that she could not remain hidden, she came trembling; and falling down before him, she declared in the presence of all the people why she had touched him, and how she had been immediately healed. He said to her, ‘Daughter, your faith has made you well; go in peace.’

Bread is really important. For many people took on a different level of importance during the first Covid-19 lockdown when home bakers started worrying about their sourdough starters. We began to reconnect with this staple of human life in a way we hadn’t when we were so busy that we would just reach for the Mother’s Pride.

Now this is quite a privileged take on the importance of bread. The bread that I put on the table can function as a statement of my social standing. Behold my homemade focaccia. But for the vast majority of the world’s bread eaters it is not so. I want to tell you a couple of stories which highlight that bread is a matter of life and death.

The first is a story from Afghanistan. It is easy to forget about the plight of Afghans given the horrific things which are happening in the rest of the world. I heard on the radio this week that shortage of food in Afghanistan is so acute that there is a growing market for scraps of stale bread. Something which we would throw in the bin is still, just, sustaining people’s lives in a part of the world where every morsel of food is seen as precious. In Afghanistan, bread is sacred, it is the stuff of life and death.

When Jesus wanted to spiritually feed his followers he didn’t just give us thoughts, or ideas, or words. He gave us food. He gave us bread. He knew that bread was sacred, it was the stuff of life, and so he made bread the sign and vehicle of his presence, his nearness to us, a presence and nearness which brings life not only to our bodies but to our souls.

The Second story is from France. A few years ago you will remember the terrible fire which engulfed the cathedral of Notre Dame. Fr. Jean-Marc Fournier, the chaplain of the Paris Fire Brigade did something extraordinary. He was assisting in the removal of relics from the burning cathedral. Just as the rescue had concluded he rushed back into the burning building to remove the blessed sacrament. Why? Why would you risk life and limb for a piece of bread? Except for Fr. Fournier this was not a piece of bread. Here are his words:

“The Blessed Sacrament is our Lord, really present in his body, soul, divinity and humanity and you understand that it is hard to see someone you love perish in the blaze. As firefighters we often see casualties from fire and we know its effects, this is why I sought to preserve above all the real presence of our Lord Jesus-Christ.”

Our gospel reading might help us think about this. We hear about a woman who had been ill for more years than she cared to remember, who saw Jesus and her faith made her think, ‘If only I can touch the hem of his robes I’ll be healed.’ She touched him and she was healed. When Jesus, knowing that someone had been healed, asked who had touched him, the disciples were confused. There was a crowd around him, pressing in on him from every side. So many people had touched him. How could he ask ‘who touched me’? So many people had touched him, but only one person had experienced his presence, and it was her faith which differentiated her from the rest of the crowd, her belief that Jesus could heal her.

Our belief, what we are expecting, has an effect on what we experience. Again, I don’t say this to make us feel guilty, but if I don’t expect much from Christ’s gift of himself to me in the Eucharist, it is at least possible that this is why I don’t experience much of him. If I come to the Eucharist expecting little, with my heart unprepared, thinking that it is just bread, just wine, a bear aide-memoire of Jesus death for me, and not a very good one at that. If I come thinking that a decent sermon and some good music would do more to bring me into the presence of Jesus Christ than bread and wine and his words, then there is little wonder that the Eucharist might feel a little flat.

But if I come believing that if the Son of God calls bread and wine his body and his blood then I should take him at his word. If I come with faith like the woman who touched Jesus’ robe, expecting to encounter Jesus Christ, expecting to have my life changed, and drawn into a closer union with God. If I come, and come, and come again, because there is no food I would rather receive than the bread from heaven, the body and blood, the life of Jesus Christ, then my experience of Christ in the Eucharist will grow.

My prayer on this feast of Corpus Christi is that we would all grow in our hunger for Jesus Christ’s presence with us in the Blessed Sacrament. That we would see in him our life, our health, our joy. And finding in the Eucharist all sweetness, that we would be filled with such life that we bring life to others.