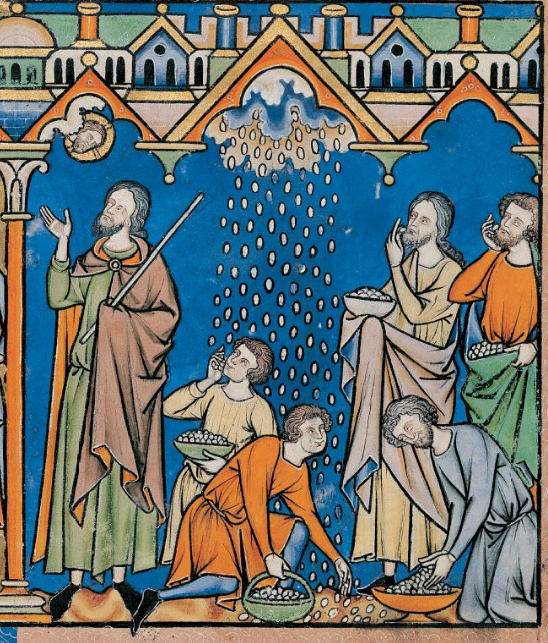 Then the Jews began to complain about him because he said, ‘I am the bread that came down from heaven.’ They were saying, ‘Is not this Jesus, the son of Joseph, whose father and mother we know? How can he now say, “I have come down from heaven”?’ Jesus answered them, ‘Do not complain among yourselves. No one can come to me unless drawn by the Father who sent me; and I will raise that person up on the last day. It is written in the prophets, “And they shall all be taught by God.” Everyone who has heard and learned from the Father comes to me. Not that anyone has seen the Father except the one who is from God; he has seen the Father. Very truly, I tell you, whoever believes has eternal life. I am the bread of life. Your ancestors ate the manna in the wilderness, and they died. This is the bread that comes down from heaven, so that one may eat of it and not die. I am the living bread that came down from heaven. Whoever eats of this bread will live for ever; and the bread that I will give for the life of the world is my flesh.’

Who is Jesus Christ? If you were to go onto Guildford High Street and ask that question you might hear one or two people saying ‘a figment of religious peoples’ imagination’. I’m sure though that the vast majority of people would be far more positive. Believers might say ‘my Lord and Saviour’, others, generally positive about religion and remembering Sunday School lessons or school RE might say ‘a prophet’, or ‘The Son of God’ or even ‘the Messiah’.

I’m sure that many people would say something like ‘he was a good man, a great teacher, and man of peace, but only a man.’ There is a lot of this about. Dan Brown’s Da Vinci Code has influenced many people to believe that Jesus was just a man, and that the church invented Jesus’ divinity centuries after Jesus’ death. Here are the words of Dan Brown’s character, Prof. Leigh Teabing:

“Constantine needed to strengthen the new Christian tradition and held a famous ecumenical gathering known the council of Nicaea… at this gathering… many aspects Christianity were debated and voted upon —the date of Easter, the role of Bishops, the administration of the sacraments, and… the divinity of Jesus… until that moment in history Jesus was viewed by his followers as a mortal prophet… a great and powerful man, but a man nonetheless. A mortal… establishing Christ’s divinity was crucial to the further unification of the Roman Empire.”

Dan Brown is no scholar or historian, and in passages like this it really shows. It is, I am afraid, a fanciful tale, as our reading from John’s gospel shows us. Almost all scholars agree that the Gospel of John was written before the close of the first century, 230 years before the Council of Nicaea.

In the reading we heard from St John we find a group of people as incredulous about Jesus’ heavenly origin as Dan Brown ever was. ‘Is not this Jesus, the son of Joseph, whose father and mother we know? How can he now say, “I have come down from heaven”?’ They said. We know this man. We saw him playing in the streets as a boy, we went to his Bar Mitzvah, we know his mum and dad. I’m sure he’s great and all that, but claiming to have come down from heaven? That’s a bit much isn’t it!?

They are incredulous because Jesus, and the community who loved and worshipped him whose memories of the Lord are recorded in the Gospel, clearly believed that he was much more than a mere man, or a good teacher, or even a prophet. They believed that the Lord Jesus had come down from heaven. That he is God perfectly united with humanity, and that as such, he alone has the ability to raise our humanity to union with God. He is the one who has given his life, his body and blood, for the life of the world, and offers his body and blood to us as food in the blessed sacrament.

To believe in Christ is to receive this gift of divine life within us. Indeed, the Lord tells us that it is impossible to believe in Jesus without this gift from God, without being drawn by the Father. By making use of every opportunity to receive God’s gift of life, through reading scripture, through prayer, and most of all through receiving the Holy Eucharist, God draws us deeper into his life.

Are you someone who believes in Jesus Christ? Do you want your love for him, your belief in him to grow? Do you want to find in him your life, your hope? Then receive him in the blessed sacrament of the Eucharist. Come regularly. Come with heart and life prepared for this gift of gifts. Come believing that this is no mere bread and wine but the true body and blood, the life of our God in the flesh. Come expecting to receive and in receiving him for your life to be transformed. We are being drawn into the life of God, bit by bit, moving closer to the source of all goodness and life. Take every opportunity to allow that drawing to happen.

But what does this mean for those whose belief has been distorted by the Da Vinci code? Remember the words of the Lord, ‘And they shall all be taught by God’.

Here is the thing about being drawn by God into union with Jesus Christ. To draw something is to start a process, to start a journey, moving bit by bit closer to that which draws us. To be taught is to begin a process whereby our minds grow in knowledge and clarity. We start thinking that the sun has gone behind a cloud. As we grow we realise the cloud has obscured the immovable sun. The journey of knowing God, of being drawn into God’s life has to start somewhere. It might start through a fascination with Jesus the man, the teacher, the prophet, the healer. It might even start with Dan Brown novels. It won’t finish there, but it may very well start.

We don’t judge these beginnings of interest in God. The task of the church is to listen, to take people’s interest seriously, to be attentive to the ways in which God is drawing people into union with Christ, and to allow our faith, our hope, our love, our joy in the Lord to help people find their way into the life, and faith, and worship of God’s church.